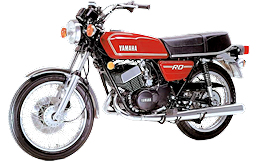 The two-stroke bullies. In 1972 Yamaha released the 350cc R5. In the same year, Yamaha 250 and 350 twins left the four-stokes behind. A four-stroke motor would not win Daytona until 1985. The fact is Yamaha for the record won thirteen consecutive times. These small two-strokes could not be beat. These were production out of the box stock, powerful, high rpm motors that would take the harsh punishment that was built into a small, lightweight package. The earlier models were piston port induction up to the year 1973.

Yamaha then introduced the Reed Valve induction system creating even more controllable power. This design was certainly a people pleaser. RD’s became a top selling bike in the U.S. They were also known to become an excellent production-class road racer. The perfect choice for the privateer racer. The RD’s also had taken their place as the local street racer or custom Café bike to own.

In 1976 the RD350 was replaced by the increased piston displacement and stroke length of the RD400. This motorcycle also had it reigns on and off the track. Yamaha keeping its two-stroke “king of the hill” claim to fame until 1979 when the factory production street two-stroke journey came to its end.

One of the emerging trends over the last several years has been the ease in creating these two-stroke screamers into customized café and custom street machines or you can just do a complete restoration.  MikesXS has a very experienced team of professionals that can help answer any questions you might have on your custom project.

Mikesxs.net was started in 2001 with the Yamaha rider in mind and has continuously been one of the largest and most comprehensive supplier of vintage Yamaha parts.  MikesXS carries everything you need to service your motorcycle, including: high output charging systems (PMA kit), hard tail frames, big bore kits, petcocks, oem type oil filters, carburetor (carb) kits, brake calipers, clutch repair kits, master cylinders, gasket sets, 7/8 inch handlebars, cam chain guides and many other items! All of the inventory listed on our site is in stock and usually ships within 24 hours.  We ship all over the world from the United States to Australia, New Zealand, Japan, UK, France, Germany and over 50 other countries