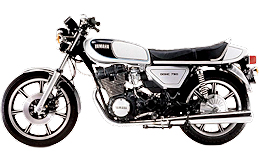 Yamaha a proven leader of innovation decided to tilt the scales in 1977 and create the XS750. This bike was ahead of its time. A narrow, three cylinder in-line with a low center gravity power plant. As if that was not enough, the motorcycles drive train was not furnished with the typical chain and sprockets and came equipped with a first of its kind shaft drive. This again was another first for Yamaha and complemented the forethought and engineering of the future of motorcycles. It had opened another complete market for the touring cyclist. Yamaha franchises came equipped after the initial shock to the customer with a complete touring package. Then this of course was the beginning of the aftermarket add on accessories for the comfort of long motorcycle road trips.

As in the past, Yamaha engineers in 1980 did the next best thing to produce a smoother ride with more power and upscale the displacement of this genesis triple motor to become the XS850. The XS850 was produced for only two years when Yamaha then dropped the “triple” in 1982 and headed into the “V-Motor” type motorcycles.

In the background, there was also a big brother to the large displacement phenomenon in motorcycle history. In 1978, Yamaha developed the XS1100. Power was produced by a dual OHC along with a set of CV34mm carburetors. The bike was a sensation to all types of motorcyclists. It had the performance expected out of a 1100cc in line four cylinder. Along with the power, Yamaha kept the welcomed and appreciated drive shaft. This allowed the variation of complete touring comfort with a no maintenance drive train or the ability to modify to a low set of handle bars for the stylish Café appeal. The XS1100 was a classy ride but not one to be reckoned with.

One of the exciting emerging trends over the last years has been the ease in which the XS1100 can be customized into a chopper, bobber, brat, cafe racer or you can just do a complete restoration.  MikesXS has a very experienced team of professionals that can help answer any questions you might have on your custom project.

Mikesxs.net was started in 2001 with the XS rider in mind and has continuously been the largest and most comprehensive supplier of XS parts.  MikesXS carries everything you need to service your motorcycle, including: high output charging systems (PMA kit), hard tail frames, big bore kits, petcocks, oem type oil filters, carburetor (carb) kits, brake calipers, clutch repair kits, master cylinders, gasket sets, 7/8 inch handlebars, cam chain guides and many other items! All of the inventory listed on our site is in stock and usually ships within 24 hours.  We ship all over the world from the United States to Australia, New Zealand, Japan, UK, France, Germany and over 50 other countries